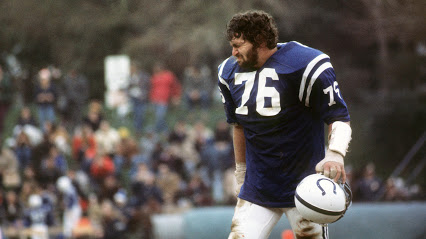 It's the day after the Super Bowl and the reality of football drifting off into the distance of our thoughts is sinking in. As a sports fan since my youth I always have a tinge of sadness when seasons end and the players move out of the spotlight and off the sports pages. It seems like every World Series, or Stanley Cup, or NBA Finals evokes the same highs and lows of excitement and sad goodbyes. We follow players as they compete and cheer them on when they hit the winning home run or catch the touchdown to secure a championship for their team.

Last week as the city of Houston filled the streets and clubs, and convention centers with all things football related, we at Regis also got into the football act by inviting Mr. Joe Ehrmann to speak to our community. Ehrmann is a former NFL defensive linemen who has dedicated his post-football career to helping boys and coaches get in touch with their character and integrity as developing young men. His message to Regis boys and parents was rather simple but hard to put into practice. To Ehrmann being a man comes down to getting in touch with our capacity to love and be loved, so that we can live for a cause that we're passionate about.

As I sat and listened to Ehrmann speak to our 6th, 7th, and 8th grade boys I noticed the faces of the boys as they listened. They were attentive and concerned as he described his difficult growing up years. They were compassionate and empathic as they asked him how football shaped his self-image and self-esteem. They were curious to know how they could be brave like him and not be afraid to stand up for what they believed in. The sheer act of listening for the boys was enough for them to be convinced they were sitting before a man who was not afraid to admit he felt pain and fear, even as a strong, powerful, 10th overall pick in the NFL draft.

A day later the boys had a moment to reflect on Ehrmann's words and they were asked questions like, "How do you cope with your inner critic?" and "How can you avoid judging yourself or others' self worth based on the lies of masculinity which say you are a man based on your size, strength, or athletic ability?" and "How can you help yourself possess the courage to stand up for what you believe in and what is right?"

Below are a few quotes from our boys as they reflected on these questions and comments from Ehrmann. A Regis boy will become a young man and influence his peers in the years to come. Beyond his academic career he'll also influence the workplace and society. I'm proud to say our boys will lead with their heart and a spirit of empathy and compassion. These boys have responded to the phrase, "Know thyself" and everyone around them will be valued for who they are.

Reflections from our Regis Boys:

"People think being a man means to have strength. It is not just that."

"There's times where I would miss out on fun things or opportunities if I listen to the inner critic voice in my head. I have to work on just ignoring it."

"Being a real man is when you show you are kind and trying to help people. It is showing that you care."

"The breathing exercise was to teach us how to control our overwhelming emotions. I think I could definitely give this a try."

"I think that being a man is mustering the courage to stand up for what you believe in."

"I have honestly been told to 'be a man' so many times that it doesn't even affect me anymore."

"As far as possessing the courage to stand up for what you believe in, if you don't stand up for it that's not truly believing in it."

"I usually think of the guilt that I feel when I do not stand up for something, and that helps give me courage."