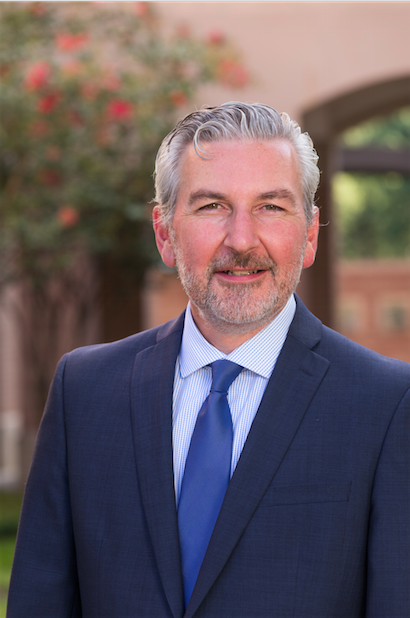 This is the greeting you’ll receive from a Regis boy when you visit our campus. That greeting could come from a kindergarten boy or an 8th grader as he shakes your hand and graciously holds the door open for you as you walk through the entry to our campus.

As you explore our website, I encourage you to discover what we call “The Regis Experience.” For every Regis boy, the journey begins when he learns and lives the five Goals of Sacred Heart Education. The Goals are a roadmap for boys as they strive to develop who they are and what they can become.

We teach the whole-boy in an atmosphere that supports Gospel values and innovative academic principles. In today’s constantly changing academic and social landscape, a boy must navigate a rich terrain of digital tools and global perspectives.  Opportunities to demonstrate integrity and responsibility are found around every corner for our students. Our Regis community is constantly engaged in serving others while empowering every boy to find his unique voice.

The remarkable story of Sacred Heart Education—which began over 200 years ago—continues to offer boys the skills needed in today’s modern world. Regis boys are leaders when they follow the words of our foundress, St. Madeleine Sophie Barat, RSCJ, “Be humble, be simple, and bring joy to others.”

Mr. Dennis Phillips has served as the Head of School since 2014.  Dennis has faithfully worked to ensure Regis has continued to be a nurturing, yet academically challenging school rooted in the Five Goals of the Sacred Heart. Under his leadership, Regis has retired over $2.5 million in debt, implemented a Math Lab Initiative, crafted and implemented the first and current Strategic Plan, rebranded Regis’ digital and print assets and completed countless facility improvements which included the construction of the new parking lot. In addition, Mr. Phillips wisely and empathically led our community through the devastation of Hurricane Harvey, and his leadership has helped to maintain in-classroom education for all Regis students during the current, unprecedented pandemic. Mr. Phillips has nurtured a dedicated faculty and administration who are committed to Sacred Heart education, empowering lifelong scholars and authentic, compassionate leaders.

In our Head of School Blog this week, we wanted to do something special, so we requested members of our faculty and staff send us reflections on life in the last year. It was this week last year that we were closing our doors for Spring Break and preparing for the possibility of remote learning as the pandemic settled over the world. Here's what our faculty and staff reflected on.

Read More about Reflections from the Last Year
Powered by Finalsite

Still looking for the right fit for your family?
Regis was recently ranked #2 in Top K-8 schools in Houston by the Houston Business Journal!
Limited availability in select grades for 2021-22.